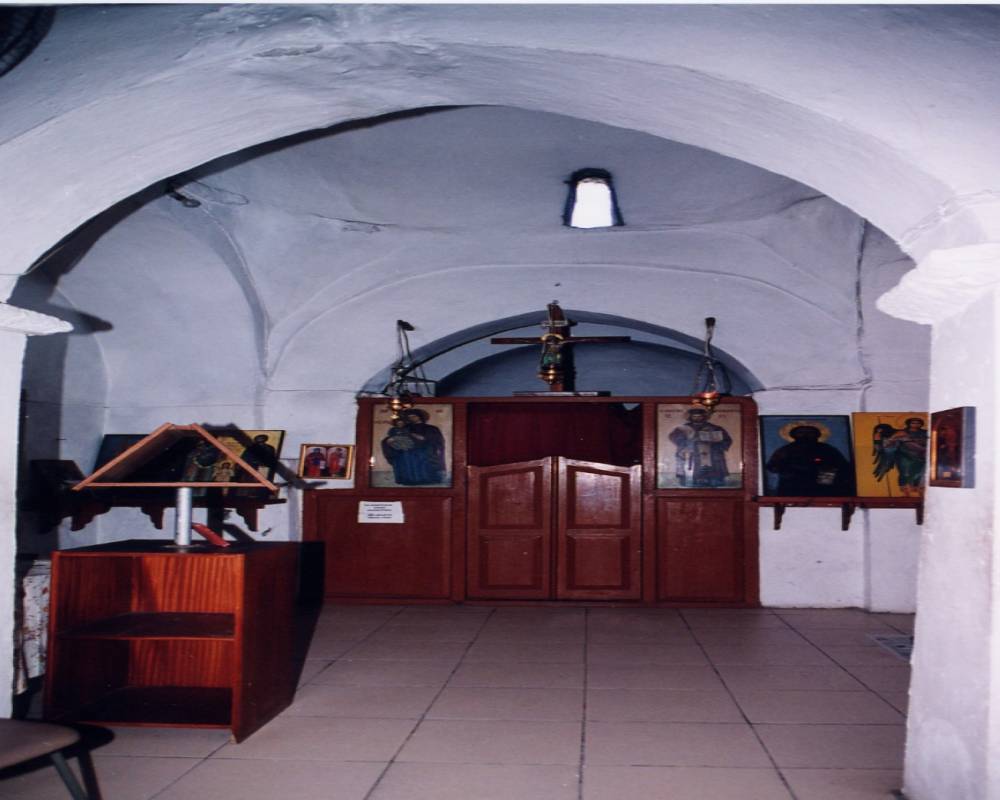 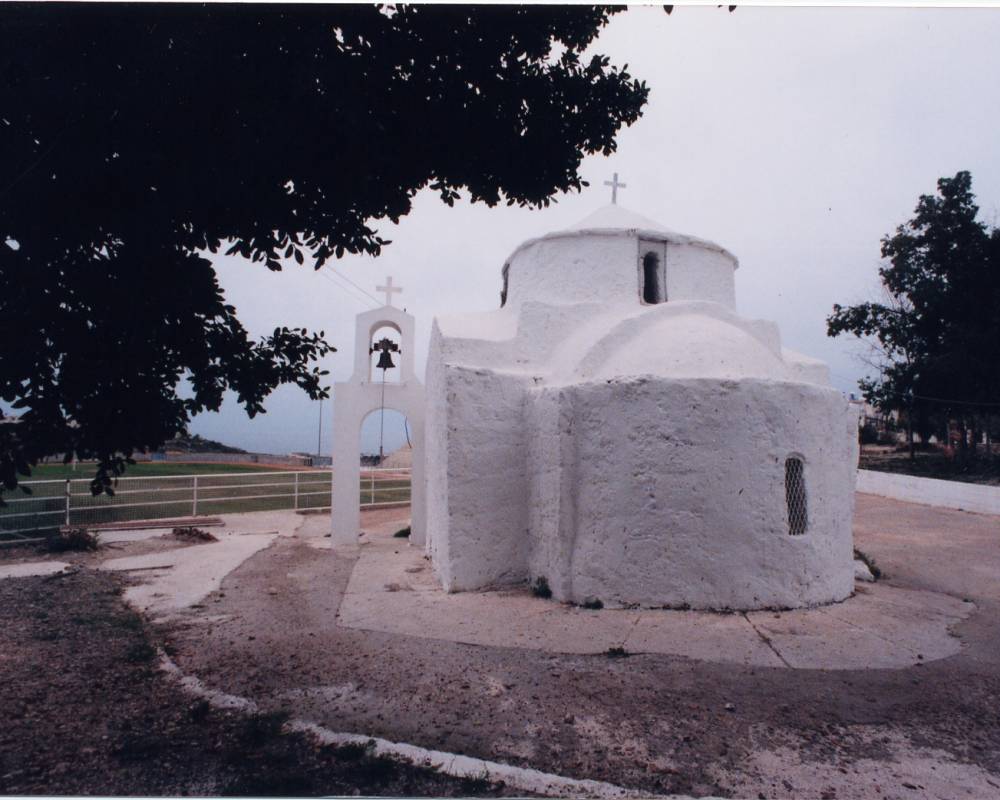 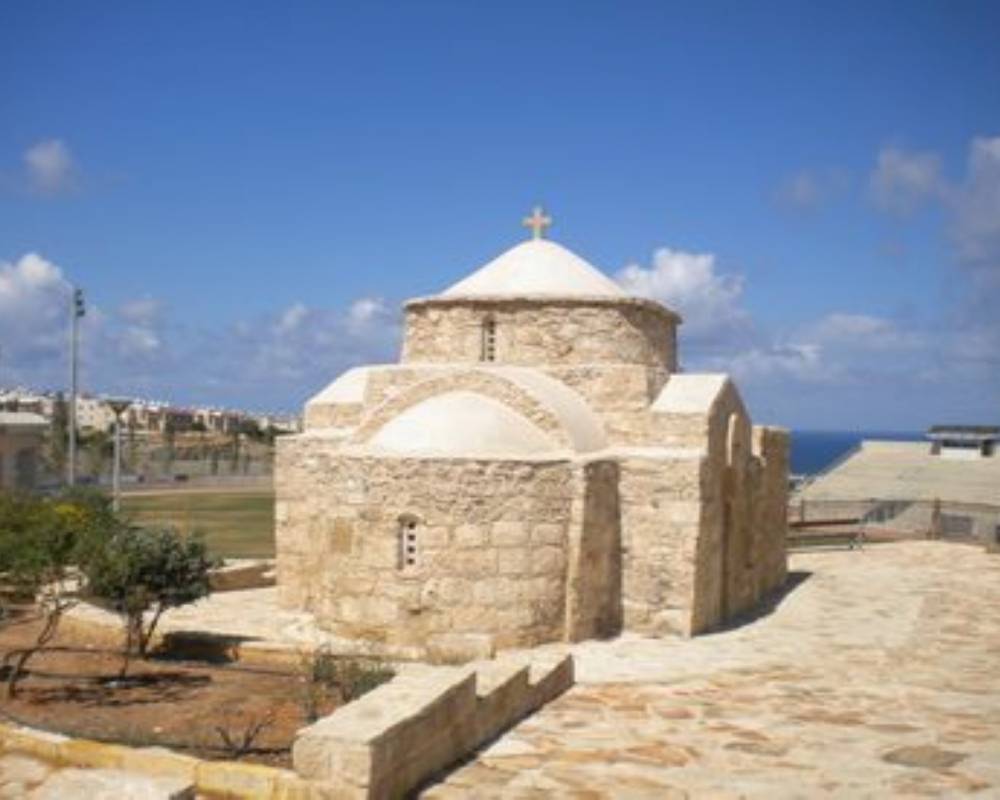 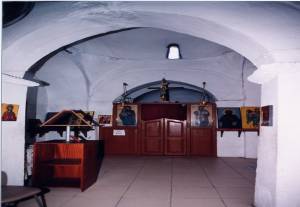 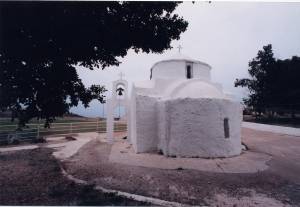 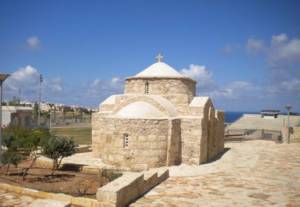 Architecture and property of the church:

A small monastery church, built on the southern edge of the village. It is of the single-aisled type with a dome. This style prevailed during the Frankish epoch. It was probably built in the 16th century. Some scholars, however, argue that it was built in the 12th century because a coat of arms of a Frankish family, seen in the entrance to the church, is the same as the one existing on the west entrance of the medieval church of Panagia Eleousa, dated back to the 12th century .

Later on, a narthex was added to the small temple. They say that there were cells all around, wherein the monks lived, who cultivated the fields around the temple and so the area was verdant. The chapel was used a monastery until the first half of the 19th century. In 1805 the monastery property consisted of fifteen scales of orchards around the church with two fountains and trees, and the land between Petrides and Emba – five hundred scales of farmlands.

According to the legend, this temple was built by a captain, who, floating with his boat from the coast of Chloraka, faced a fierce storm. Then, he made a vow to Agios Nikolaos (St. Nikolas) that if the storm subsided, he would build a temple on the hill that overlooked in front of him, and so he did.

The interior of the temple:

On the northern wall of the temple there were traces of frescoes of Saint Nicholas and his life. The iconostasis of the temple is simple. There are four portable icons on the altarpiece. On the eastern wall there is an imposing icon of St. Nicholas, depicted as a hierarch. His face is ascetic, polite and in harmonious proportions. He is almost bald, with his forehead large and wrinkled, and his eyes big and expressive. The beard and moustache are round-shaped.

To the right of the main church there is a frame, where tributes were placed, mainly shoes and waxed feet. There is the icon of Saint Xenophon of Xorinou posted in there. Believers were taking soil from this place because they considered it blessed by St. Xenophon and repelled the evil.

Until recently, near the temple there was a spring, where the holy water was flowing from and ended in a lake. From this lake the children of the primary school took water to irrigate the school garden. Around the church there were many oaks, which the church later sold to Turkish Cypriots who had baths in Ktima.