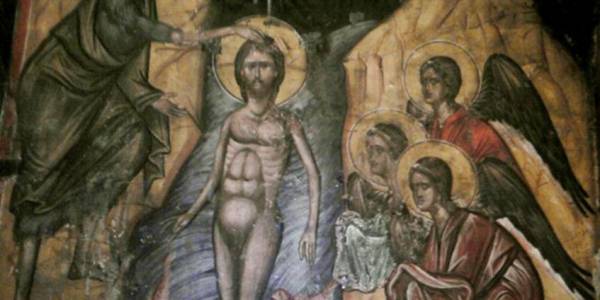 A rare hagiography with Christ be baptized completely naked is found in the small ancient Panagia Eleousa church in Chloraka.

It was built in the 12th or 13th century in a Byzantine style, and is located in the central square of the community. In the dome and in various parts of the walls, but especially in the sanctuary of the temple, there are rare hagiographies, and among them the unqiue perhaps iconography, where, according to old archetypes, Christ is in the Iordani River, completely naked with his legs slightly crossed in order to cover his male genitals.

Distinguished from other hagiographies as regards style and artistic value, it shows Christ standing in the middle of the Jordan naked, nude as Adam, thus rendering the glorious raiment of Paradise, which the humanity should have been enrobed.One foot is put forward in front to show his supreme initiative to be baptized by John, but also to hide his nakedness, which perhaps could abash the thoughts of sinners.

In the church of Panagia Eleousa in Chloraka, Christ is naked, completely naked.While elsewhere he wears white clothes, in this hagiography the painter, without moral phobias and scruples for the naked, in a supreme representation of the son of God, represents the nakedness of humanity, without his own nakedness to provoke, thus stating that roads laid down by the Church are not provocative. (From the E-book  K. Tapakoudi “Απαντα της Χλώρακας”)