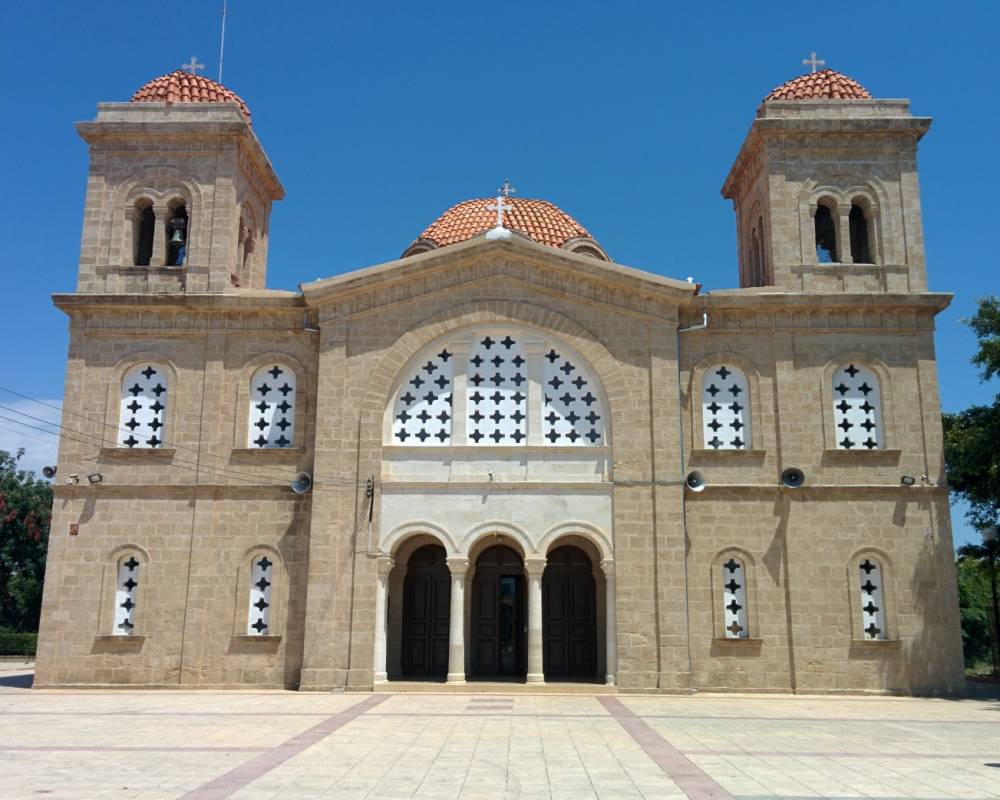 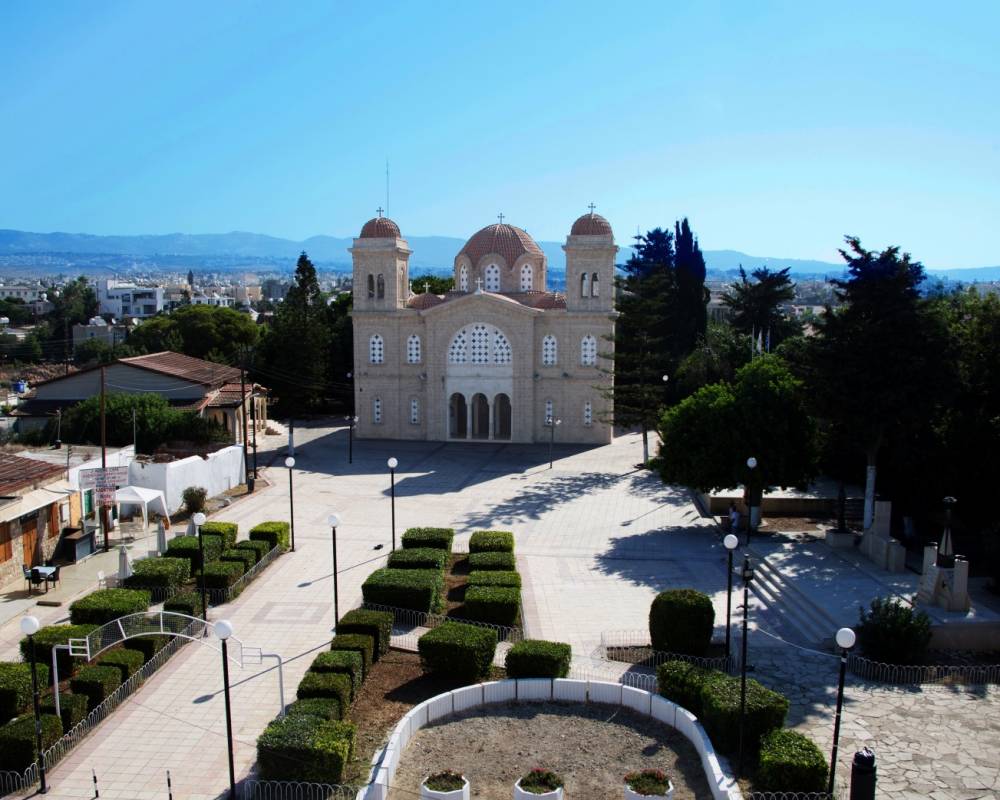 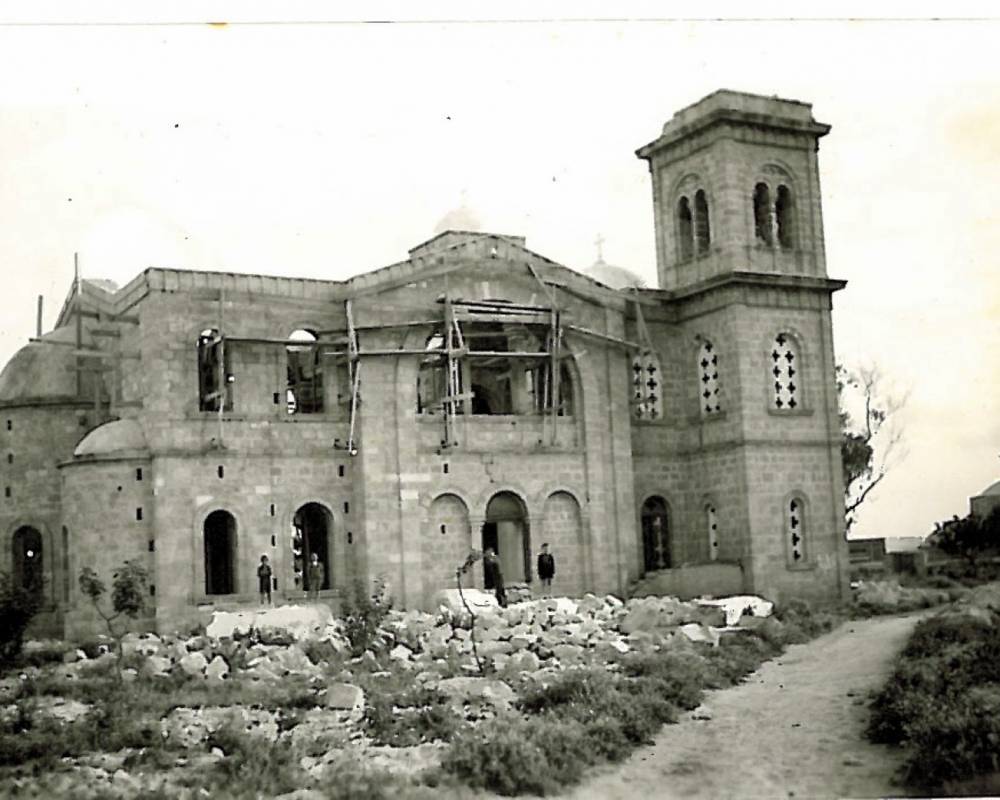 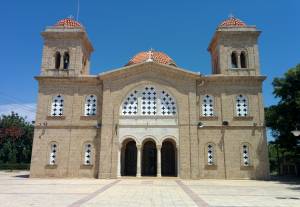 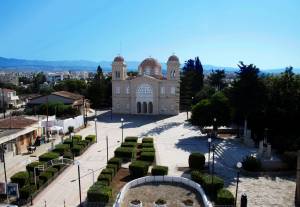 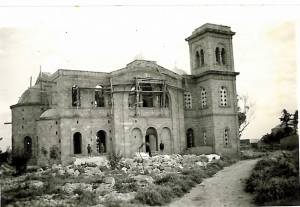 The Panagia Chrysoematousa Church is a charming, impressive building located right in the center of the village.

The building of the temple and the first commissioners:

The temple was built in 1928 at the time of Metropolitan Iacovos (James). It is styled as a Byzantine cruciform structure with a dome. The architect was Th. Fotiadis, and the contractor was Michael Georgiou. The masons were from Geroskipos and Chloraka. The first churchwardens of the church were: Nicolas Chr. Laurie, P. Ch. Chatzichaharalampous, Philip Economou, Panagis Michail and Constantinos Charalambous.

The earthquake of 1953 and the temple rebuilding of the temple:

The great earthquake of 1953, which mainly hit Paphos leaving behind the dead and ruins, did not respect even the Gods. About half of the church had been demolished, while the rest was dilapidated. To be rebuilt, it had to be entirely demolished. But a few days before the works started, the dilapidated part of it had fallen by itself, fortunately without any casualties.

As long as the church was under reconstruction, the villagers worshiped in a shanty that had been constructed for this purpose in the churchyard.

After the earthquake, the government granted the amount of three thousand pounds to the Church Committee for rebuilding of the temple. Of course, this amount was quite small. So, the Committee treasurer Ioannis Chatziikonomou undertook a fundraising in all districts of Cyprus. The other members of the Committee were: Georgios Mavronicolas, Georgios N. Pentaras, the Priest Charalampos Papantoniou, the priest Kostas Leonidas, Georgios Chatziikonomou, Ioannis Vannas and Efstathios Chatzikleovoulos.

The contractor who undertook the reconstruction of the church was Antonis Theocharous (Antonos). Having left their children to the care of their wives and in the providence of the Virgin Mary, the members of the Committee were wondering about the villages of Cyprus with the sacred purpose of collecting money to rebuild of the temple. Ioannis Vannas, who was one of the first car owners in Chloraka, helped in their movements.

Significant financial assistance for our church was offered by the Princess Zena Kanther de Tyras. This great benefactor of our village was not willing to offer money from the beginning. When she was visited by the treasurer – priest Charalampos Papantoniou and the priest Kostas Leonidas , asking for her help, she welcomed them coolly due to some misunderstanding. When, however, the misunderstanding was resolved, Ms. Kanther promised that she would come to the village to inspect the church to take relevant decision. On St. George’ day she came to our church. The priest, to compliment her, had adorned after his sermon, with fairly fine words on her face. After the liturgy Mrs. Kanther informed the commissioners that she would offer a sum of three hundred pounds. Everyone was happy. After some time, she offered another one hundred fifty pounds.

The first altarpiece of the church was made of mosaic. About ten years ago, it was replaced with a nice wooden carved iconostasis. There are fourteen portable icons and above them there is a narrower zone, consisting of twenty-eight thumbnails. The icons of the Virgin Hodegetria and St.John the Theologian of  antique value were earlier in the possession of the medieval church of Panagia Eleousa.

When the icon of the Virgin Mary was to be transferred from the medieval church to the new one, no one dared to touch it because they believed that anybody daring to move it would die. They say that in the past a man who tried it, lost his life. Only Papa – Giorgis dared who first had prayed to the Virgin Mary. But as he held the icon in his hands, he felt it pushing him backwards. Finally, however, he managed to take it and place it in where it is today. Below the icon of the Virgin there is the following dedication: Remember, our Lady, your slave Loizou and what happened to him, in the year of our Lord – December (1778). Inside the temple behind the icon of the Virgin mounted there was always a red ribbon, known as a belt of Panagia Chrysoematousa, which is believed to stop bleeding. Any woman bleeding should gird herself with this belt, and she will be then obliged to send back another new band to the church.

In the recent years the churchyard was paved, and it would not be an exaggeration to say that it has become one of the best squares in the entire Cyprus. There, the various cultural events of the village are also hosted. It is worth mentioning that the square is adorned with a bust of Captain Georgios Azina, who died at age of 23 on the 1st of April of 1949 in Grammos, during the civil war in Greece. The of the bust was unveiled in December 1963 by Ethnarch Makarios, who was accompanied almost by the whole Council of Ministers. The statue of Christodoulos Polydoros, the hero of invasion, also adorns the square. Also, next to the church there is a ceremonial hall. Finally, at the end-point of the church there is the old cemetery of the village, used until 1960.